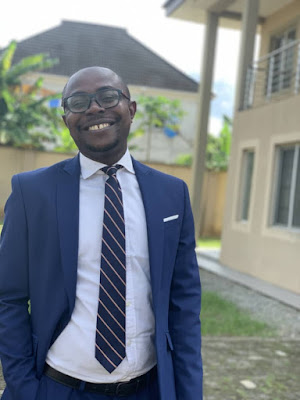 At the time of me writing this article, lockdown laws enforced by governments all over the world to curb the spread of the the global pandemic caused by the COVID-19 flu are starting to ease down.  In its place is the growing anxiety of the unforeseen consequences it will have on modern society. By and large it has already left its skid marks on the global economy, intensified mental illnesses and challenged personal and professional relationships due to extended periods of quarantining.

Furthermore, in a world that is increasingly adopting social distancing measures as its new way of life, healthcare professionals now find themselves looking for alternative ways to effectively offer consultation and provide treatments to their patients.


After I spoke to Dr. Jonah Asiegbu, I felt the weighed responsibility to impress upon the world the astronomical lengths that he is taking within the Nigerian health sector in making it more efficient and affordable for patients to receive primary healthcare through his telemedicine start-up, ‘First MedTrade Africa’.

Focused. Visionary. Perfectionist. Those are the words that bounced around in my head in the hour and a half I had to dissect the brain (and heart) of Asiegbu. With more and more partnerships solidifying the growth of First MedTrade Africa, including German health provider ATOS Group, it was just as well that before he got his hands full propelling his rocket into the stratosphere, he could fit me in for an interview.

According to Asiegbu, it takes a special type of person – a patriot - to say that they want to practise medicine in Nigeria: “When all of us leave Nigeria who stays back? Somebody has to change the narrative.”

Despite his opinion, many of his doctor friends have left the country to escape working in a system that is teetering on its edges. Of the 75,000 registered medical practitioners in the country, 40,000 of them are currently practising overseas in places such as Saudi Arabia, Canada and the UK. And can anyone blame them?

Average salaries for junior doctors in Nigeria currently stand at 200k naira a month (£500) with top medical consultants not even touching the £2000 (less than one million naira) mark at the end of each month. When one compares this with junior doctors in Canada earning on average £30k (₦14,375,475.00) yearly in salary it makes the decision to leave ones country much more easier.

The World Health Organisation suggests nations should have a doctor to every 600 people but in Nigeria there’s one in 4000. The deficit in medical personnel is frankly embarrassing if we are still claiming to be Africa’s Giant.

Dr. Asiegbu’s journey to assuage the healthcare sector in Nigeria started from an early age. Born in 1985 in the southern state of Cross Rivers, after the death of his father when he was three years old, his widowed mother single-handedly took care of him and his four siblings. Having a mother who so emphatically and practically made sure that Asiegbu was the best he could be, he recognises her as the breeding ground for his success story both as a physician and entrepreneur. Even before he could hang a stethoscope around his neck, she was constantly telling him he was a doctor.

When discussing his academic background he cites his university’s chancellor as one of his earliest inspirations who whilst attending Igbinedion University, would invite the country’s influential figures such as former Head of State Ibrahim Babangida to give speeches to the student body. Seeing the fleet of cars and other symbols of wealth that frequented his campus sparked Asiegbu’s desire to want more for himself and his future. And those boyish ambitions have carved out the man he is today.

After finishing his first degree in 2013 he went on to do his internship at University of Calabar Teaching Hospital. It was during this period of his clinical rotations (including time in the neurosurgery unit) in 2014 that the seeds of First MedTrade Africa started being planted in his head, where he was able to experience first-hand the failings of the health system in Nigeria. Since gaining his full medical licence in 2016, he has worked in hospital wards which has helped him understand further the pain points of patients whilst attempting to receive treatment.

Part of the main problem he believes, “the system that was the teaching hospitals or the tertiary sector that was planned in the sixties shouldn’t be the same manuscript we are using now.”

The WHO advises a health budget allocation between 14%-25% but Nigeria’s own is less than 10%. In a way it sabi that the government no get shame. 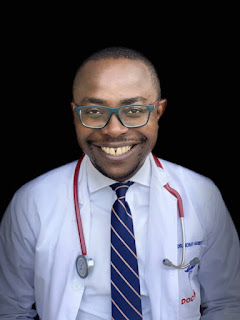 Rewind back to less than forty years ago and the state of healthcare in Nigeria looked promising. Before Nigeria gained independence in 1960 there had been a ten-year developmental plan drawn up a few years prior detailing objectives the nation intended to achieve in the subsequent years. At first, everything seemed fine. For every Nigerian citizen, medical treatment was free, and the government made it a point to invest in the health sector by awarding students with scholarships to travel abroad and study medicine. Once these students were finished with their studies they would come back to Nigeria and a job would be waiting for them. But the country’s over-dependence on oil precipitated the deterioration of the health sector starting in the 1980s.

When someone decides to be an entrepreneur it is because they want to solve a problem and see a gap in the market. With Asiegbu he saw it was the bastardization of the health infrastructure, but what he could not foresee is the biggest biological warfare in contemporary times that will redefine doctor-patient relationships and will prove to be a blessing in disguise. “I never envisaged that there will be a pandemic like this. So now I think this is the birth of telemedicine in Nigeria.”

Even though Africa is the least affected continent with COVID-19 it is far from comforting given the still rising numbers and the lower standards of hygiene that is found in our part of the world. In Nigeria alone over 18,000 people have had the coronavirus with over 400 of them succumbing to the flu, including Chief of Staff, Abba Kyari in April.

Simply put, the primary healthcare needs help. But it takes another type of person to say they want run a business in Nigeria.

When Asiegbu decided to create his solution in 2016 thankfully he was in the fortunate position to be able to bootstrap the running-costs himself. Speaking of the start-up ecosystem in the country he says, “the bank interest rate is outrageous. There is no funding for start-ups. And that is where the brain drain is. Nigerians are one of the most intelligent people I’ve seen on Earth. When I hear what the young chaps, the ideas they have but there is no place to exhibit them. This is how countries grow […] The government does not provide any start-up funding. […] The major problem in this country is lack of insight and lack of funding.”

It would be a trip to Germany where he pitched his idea to a group of doctors, that would give him the greenlight to go full steam ahead with his project. Even though those close to him saw the potential in his vision as with anything great it always takes longer for the masses to catch up.

From the price of a few agege breads, patients can receive online consultation with certified doctors from an extensive list of specialties such as dermatology, cosmetics, dentistry and cardiology.  To register, patients fill out a straight-forward registration form and book an appointment with their chosen doctor hassle-free. As well as being a B2C start-up, First MedTrade Africa also works as a B2B alongside hospitals by providing air transfer services for patients. In June, they launched an online medical market to provide hospitals with medical equipment to add on to their services.

Growing an online medical platform is all well and good but when half the population lives in rural areas and many of them do not have stable electricity talk less of a mobile phone with internet data, that can be a cause for concern. Nonetheless, this is a challenge that Asiegbu is ready to conquer too saying, “healthcare in Nigeria is an untapped goldmine.”

Another thing which Asiegbu wants to tackle with First MedTrade Africa is medical tourism. In a recent report Nigerians reportedly spend £970m yearly going overseas namely the UK, Middle East, United States and India to receive treatment.  When even the President has to fly abroad for treatment that is when we should think sometin de deh. “We need to reverse that history. There must be a reason for Nigerians working abroad have to come back home. We have to give them a comfortable environment to work and then we have to make sure they’re safe.”

He classes Donald Duke, Akinwumni Adesina, Sanusi Lamido as his inspirations also Dr Adeyemi Johnson who has been a pioneer in the cardiology field within the country.

It is important as Nigerians that we look up to people within our homes instead of looking at outsiders or we are just going to be forever stuck in this Stockholm syndrome perpetrated from colonialism. “Most of these patients travelling out of the country do not believe that there are physicians in this country that can take care of them. Because there are no data, there are no communities, there are no online platforms [to show this].”

Even though First MedTrade Africa is an ‘indigenous company from Nigeria’ Asiegbu realises that there is more to be achieved when it is a collaborative effort. “First Med Trade is a bridge to the world meaning that we need those partnerships with international communities […] We have to learn from them, we need those partnerships to strengthen our back end, to be able to strengthen the African market.”

Any entrepreneur that has ever had to grow a team knows that a company is only as good as the people who work in it. Asiegbu knowing this, he credits his core team Amina Ibrahim (COO), Princess Uzoukwu (CFO), Jude Joshua (ICT Manager) and Mfonobong Etokakpan (CMO) who have worked tirelessly to help breathe life into his vision.

Now four years in and a soft launch earlier this year in February, he teases how much more is in store for First MedTrade Africa including a mobile application which is currently being developed.

With only 24 hours in a day, Asiegbu makes every second count by starting at 2am in the morning and drinking strong black coffee (no milk, no sugar – just how I like it!).  Whilst he tries to work out how many cups of coffee he drinks in a day I hear Amina, telling him that he probably goes through more than five cups of coffee a day. Given his schedule, I am not surprised.

And his hard work is paying off. With First MedTrade Africa on Nigeria-based venture capital firm VC4A portfolio, he has been able to gain the attention of investors who are looking to help raise his Series-A funding to support the expansion plans. Added to this, the start-up has also been accepted in Forbes 2020 Startup Digital Accelerator Program.

Whether First MedTrade Africa will stick around does not really matter. (Though I have a strong feeling it will). What matters is that it is becoming a part of an important discourse on how technology and digital platforms can positively contribute to health provision in Nigeria.